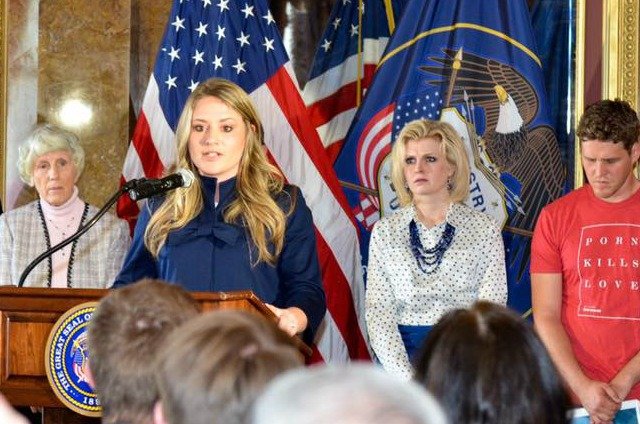 Do you have skeptics in your life who don't understand the dangers and damages of pornography?

Every morning when Dawn wakes up, the porn industry winces and takes another hit! One of the most powerful tools she is using is an annual Dirty Dozen List. Each year Dawn and her team work with Patrick Truman, President of NCOSE, to compile a list of organizations who profit from the sale of pornography, and then they ask these organizations to make changes. Through a series of press conferences and emails to supporters, NCOSE creates an organized effort to name and shame contributors to sexual exploitation and pornography. (See below for how you can easily add your voice to this amazing campaign.)

NCOSE has made it easy to email company execs or sign online petitions to help put the pressure on. If you’d like to take action on something important, choose one of the Dirty Dozen and add your voice against sexual exploitation. It’ll only take a minute! (And you'll be supporting a mom who's trying to make the world a safer place for your kids!)

My Interview with Dawn Hawkins

I first met Dawn two years ago at the first Coalition to End Sexual Exploitation Summit near Washington D.C. Recently she chatted with me on the phone to help me understand why she wanted to devote her life to fighting pornography and all forms of sexual exploitation.

Kristen: Dawn, why do you fight the seemingly impossible, uphill battle against an industry and a cultural norm that seems so acceptable today?

I never saw myself as being a loud voice, but I’m determined to stay in the fight.

How Dawn Got Started

Kristen: How did you first get the idea to work on this problem?

Dawn: I served a mission for my church in Hungary and I remember the moment when I thought, “I have to spend my life fighting pornography.” (Although, at that time I thought that meant volunteering in my extra time to help some big organized effort already underway.)

As I worked and taught many people in Hungary, it was clear to me that their sexualized culture was causing many heartbreaking problems. I couldn’t shake the idea that maybe when I returned to the States, I could help somehow.

Inspiration from a Mama Bear!

Kristen: So you were in your early 20’s during your time in Hungary. Now you’re married and a mom. How does being a mom change things?

Dawn: I was already passionate before I had kids, but after having my son I’m like this mama bear. I notice that even at the age of 2, my son is drawn to all sorts of media. He’s taking everything in! I’ll be watching something that I’m sure is all over his head, but I notice that he focuses on screens. Or while standing in the checkout line, I sometimes realize that his gaze has rested on the magazines. I’ve realized that I have to be very vigilant, but also that no matter how hard I try, these hypersexualized images will still make their way into his young, innocent world. I don’t think my parents realized how aware I was as a child.

Being a mom has also given me a lot of courage to speak out when I see an injustice—I have to do this for my children. I have conversations with my peers because I know if my child goes over to a friend’s house, they can be exposed. I want my children’s friends’ parents to understand my concerns and have safeguards in place when the kids are on the internet or watching television.

Kristen: I think it’s probably hard for parents to speak up like this to other parents, but it’s definitely worth it!

Dawn: It is worth it, but it is hard and uncomfortable even for me. I don’t want my son to fall into this trap, so I need to be assertive. I am deliberately thinking of ways to talk to him about this danger. He’s starting to talk, so I’ll start teaching him about good pictures and bad pictures just like I teach him about other good and bad things.

Resources for Parents (and a Shameless Plug!)

Kristen: Your son is almost three now, so he’ll be just the right age for our new book coming out this fall: Good Pictures Bad Pictures JUNIOR. I really appreciate you helping us with the manuscript and being a beta-reader for it.

Dawn: I was happy and honored to review it! It’s great! Thanks for putting this tool together. As you know, I hear from hundreds of concerned moms and dad who want to help protect their kids, and I’m so glad we have strong resources like Good Pictures Bad Pictures and the new Junior version to refer them to!

Kristen: Thank you, Dawn. It’s great to have your support! Besides teaching your kids about good pictures and bad pictures, what other skills do you plan to teach your kids?

Dawn: I want to teach my kids media literacy skills—I want my kids to be able to take in the good and reject the bad from the media they consume and are exposed to. Growing up healthy in the digital age means learning critical thinking skills.

A Message for Moms

Kristen: It’s not easy to parent in the digital age. What message do you have for other moms?

To protect kids you have to prepare them to reject these messages. Even when you have filters and rules, you have to empower kids to protect themselves.

Young kids pay attention so we have to help them make sense of it and not ignore it. We have to be deliberate and intentional about protecting them from pornography and teaching them to protect themselves.

Dawn Hawkins is a passionate defender of human rights who has dedicated her life to fighting against societal harms that threaten the dignity of others. Her energy, creativity and mobilization skills have revived the anti-pornography movement.

As Executive Director of National Center on Sexual Exploitation (NCOSE), Mrs. Hawkins has developed a national strategy uniting conservative, women’s rights, child advocacy and religious groups, including a bipartisan political leadership, to work together raising awareness of the pandemic of harm from pornography. Her initiatives have led to sweeping policy changes of policies that foster exploitation for targets such as Google, Verizon and the Department of Defense. Through her leadership, NCOSE has grown a network reaching hundreds of thousands of people all over the world. Mrs. Hawkins has appeared on many local and national television programs, including Fox & Friends, CNN and Good Morning America. She regularly authors articles and speaks around the country addressing the harms of pornography and all forms of sexual exploitation and what can be done to curb the growing public health crisis resulting from pornography.

Is VR Bad for Your Brain? A Neurosurgeon's Expert Opinion