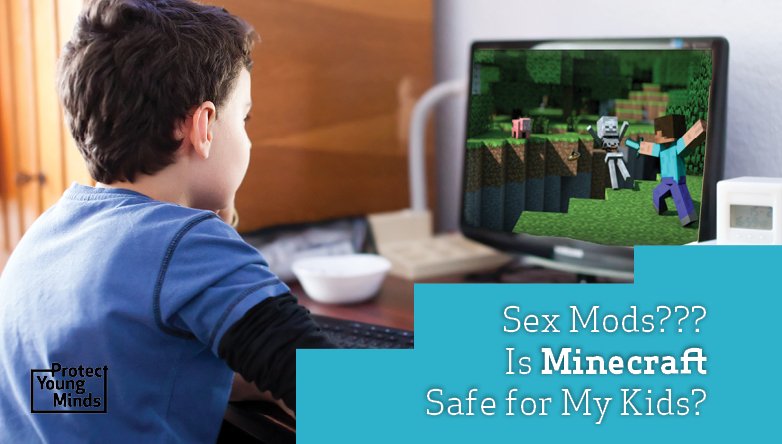 Sex Mods??? Is Minecraft Safe for My Kids?

Minecraft is an awesomely creative video game that millions of kids (and adults) love to play. But lately, there’s been a scare about Minecraft “sex mods” that has parents freaking out. It’s true: players can add sex mods to their Minecraft games. However, I did some research and found three simple ways to keep kids safe on Minecraft.

What is Minecraft all about?

Minecraft is called a “sandbox” game because players can be in the same “realm” or server but doing their own thing. For example, each player can create farms and grow crops, herd sheep and build castles. And depending on the mode they’re playing in (creative vs. survivor), they’ll have to fight off monsters at the same time! It can be argued that Minecraft is educational--kids develop skills in planning, spatial reasoning, and even math. And they seem to have lots of fun as well!

What are the different ways kids can play Minecraft?

There are a few ways kids can play Minecraft and that makes a big difference when it comes to encountering “sex mods” or predators. Your child can join a multi-player game for a one time fee to purchase the game (to play on a PC or Mac, game console or mobile devices) OR you can purchase your own “realm” and invite only trusted friends and family to join you. That’s what my kids do.

I reached out via email to Bec Oakley, founder of Minemum.com, for some clarification.

“In a nutshell, the upside [to purchasing your own] is that you can open your own realm to selected players only, it's a cheap way to run a multiplayer server and there are some fun ready-made mini games and maps that you can use. The downsides are that it costs money, anyone can invite your child to play on their realm and you can't use mods.”

Regarding the downside of invitations to play on others’ realms, Bec advises parents to “monitor the invites that your kids are getting, and teach them not to accept invitations from people they don't know.”

2020 Update: The website Minemum.com does not appear to be operating anymore, but the information in this article is still great info!

Mods are little bits of code made and shared by players (not Mojang, the game’s maker). They can let you alter the game in fun ways, like making the grass purple instead of green, introducing dinosaurs to your world or letting you create huge explosions.

However, the Minemum warns parents that mods come with their own dangers. According to the Minemum, mods “can cause the game to crash, delete worlds or data, corrupt game files or contain viruses.” They are not monitored by Majong or age-rated and so may contain pornographic material.

This is where the sex mods come in. They are available, but to encounter a sex mod, your child has to play on a server where someone has installed a sex mod. For more information from Snopes on Minecraft sex mods, read this.

That’s why the Minemum recommends purchasing a realm as a safer method of playing Minecraft. Even without mods, Minecraft can be loads of fun. This is how my kids play it and they haven’t run out of fun things to do or build.

Teach kids early (as soon as they are old enough to play Minecraft) how to recognize and reject pornography. Let them know that pornographic material is on YouTube, but if they ever are curious about sex or pornography, they will get better answers from you instead of looking for that kind of info on YouTube.

Every child deserves to be empowered against the dangers of pornography