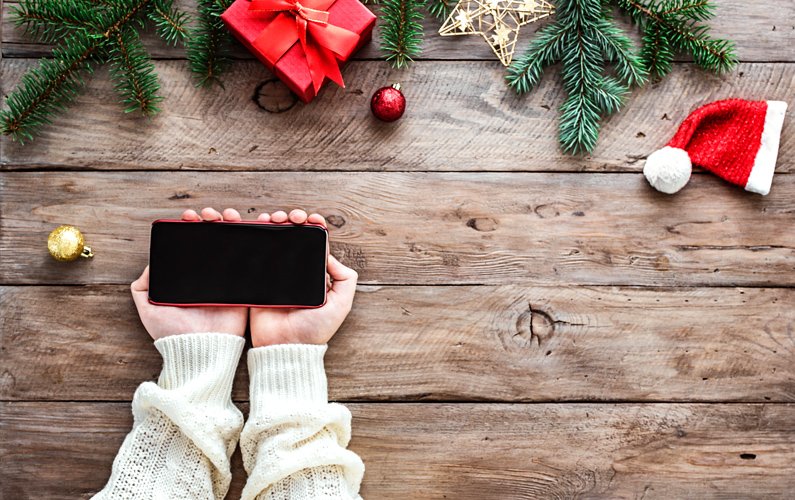 Thinking about being a holiday hero by getting your teen or tween a smartphone? Most teens want one, but a smartphone can be a big risk--opening them up to pornography, sexting, cyberbullying, and online predators.

Before buying that Black Friday deal, consider if your child is ready and how the main competitors stack up on safety.

Reality Check: Does Your Child Need a Phone?

We’ve talked before about how to know if your child is ready for a phone. As a reminder, here are four quick questions to ask yourself:

If you’ve decided your child is ready for a phone, how do you know which device to pick? Your teen may want a smartphone, but you also have the option of buying a watch phone like Verizon’s GizmoWatch, a screenless phone like Republic Wireless’ Relay, or a flip phone like a Jitterbug.

If you decide on a smartphone, we’ve evaluated the most popular kids’ smartphones for the following factors:

Tweens and teens are still learning how to be responsible with a device, so consider the replacement cost of the phone. You’d hate to be out $900 when your child smashes their device in a skateboarding accident or drops it in a friend’s swimming pool.

Some phones come with the ability to use the phone as a tracking device. Great for finding a forgotten phone or making sure your teen really is at the library.

You take this feature for granted on your smartphone, but picture texting opens teens up to sexting and sextortion. Some phones can restrict this ability. There are ways around this with apps like Snapchat, but limiting picture texts can be a vital defense.

Phones designed for kids restrict the available apps or require parent approval to install them. You’ll also want something that can limit in-app purchases. Of course, teens can find clever ways around these restrictions, which is why some phones have no apps at all.

Related: 3 Steps to Give Kids an Internal Filter

Many adults spend too much time on their phone, and the problem can be magnified with a teen’s lack of perspective. Time limits and other device health features can reinforce the rules you’ve talked through with you child.

Many phones provide a way to monitor your teen’s activity. No software is a replacement for a healthy relationship, but it can provide you with additional peace of mind.

Here’s how the most popular smartphones stack up on protecting your child:

Cost: Varies. Android phones are available at a wide range of price points from various manufacturers. Make sure you buy one that runs Android 10 or higher; only those phones have Family Link, Google’s parental control app.

GPS Tracking: Yes. Through Family Link, parents can view the location of the child’s phone and also play a sound from the phone to help locate it.

Prevent Picture Texting: No. Android does not have any settings to prevent picture texting or limit contacts.

App Limitations: Parental Approval. Family Link allows parents to filter content in YouTube and other Google controlled apps. Other apps can be locked with a password so the child needs your permission to open them. The Google Play Store has separate controls that allow parents to prevent the installation of new apps and in-app purchases and set rating limits for movies, books, and music. You can also block the installation of apps from third party stores.

Internet Filtering: Yes, first party and third party. Family Link has three filtering levels: all sites allowed, try to block mature sites, or only allow certain sites (where the parent provides a list of acceptable sites). There are also a wealth of third-party filtering solutions on the Google Play store, so you can pick one that works for your family.

Time Limits & Device Health: Yes. Parents can set time limits for individual apps, for total time spent on the phone, and a bedtime limit to prevent the phone from being used at night.

Parental Monitoring: Yes. Family Link lets the parent see all of the child’s activity on the phone. You can also see all internet history, and that history cannot be cleared without a password.

Since we love Bark so much and it handles internet filtering, time limits, and monitoring content it’s worth mentioning that Bark is compatible with Android devices.

Cost: Varies. In general, older iPhones will be less expensive. You need an iPhone running at least iOS 9 to get Screen Time, Apple’s parental control app.

GPS Tracking: Yes. Using the Share My Location and the Find My app, parents can monitor the location of their teen’s phone.

Prevent Picture Texting: Limited Contacts. While Apple doesn’t allow you to block picture texting, you do have the option to limit who the child can communicate with, so you can keep their communication to trusted friends and relatives you enter in their contacts.

App Limitations: Parental Approval. Content & Privacy Restrictions let parents block default apps on the phone as well as control the ability to purchase and install new ones. Apps, music, and media can also be screened by specific content ratings.

Internet Filtering: Yes, first-party only. Internet filtering is similar to Android with three options: Unrestricted Access, Limit Adult Websites, or Allowed Websites Only. Unlike Android, Apple has recently cracked down on filtering apps so many of third-party solutions are less effective or non-existent.

Time Limits & Device Health: Yes. The Downtime feature lets you set a bedtime for phone use. Parents can also set limits on individual apps or broad app categories like Games or Social Media, limiting the amount of time your child can spend on these apps.

Bark is also effective on iPhones, though some features may vary due to Apple’s restrictions on third party apps. We’ve tried it out on Apple devices and it works well.

Cost: $99.99. Learn more about the Gabb Phone from our interviews with parents or check out their website.

GPS Tracking: Yes. Parents asked for it, and it’s finally here! Gabb Phone is upgrading its phones to include GPS tracking in November 2020.

Prevent Picture Texting: Yes. Gabb Phone has the option to prevent picture texting at the network level so your child won’t be able to send or receive inappropriate pictures.

App Limitations: 14 Custom Apps. The phone comes with 14 basic apps--things like a calendar, calculator, and voice recorder--but doesn’t allow any other apps. It’s by far the simplest way to restrict what your kid can do on a phone without arguments.

Internet Filtering: Completely Blocked. Gabb completely prevents internet access so you don’t have to worry about your teen sneaking around filters.

Time Limits & Device Health: No. Given the lack of apps on the Gabb phone, it’s unlikely screen addiction will be a problem. However, it would be nice to be able to set a bedtime for text communication with friends.

Parental Monitoring: No. Again, a lack of internet access means monitoring is less necessary, but if you are concerned about monitoring your teen’s texts, you won’t be able to do that.

Cost: $449. ClearPHONE is a modified Android phone designed for privacy which could also work very well for families.

GPS Tracking: No. Given the emphasis on privacy, it makes sense that ClearPHONE doesn’t have GPS tracking.

App Limitations: Parental Approval, Tracking and Ads Removed. Parents can choose which apps will be allowed on the device. An added bonus is that ClearPHONE scrubs the tracking and ads from popular apps so they are more safe and secure than their Android and iPhone counterparts.

Internet Filtering: Yes, first-party only. ClearPHONE’s browser blocks all advertising and tracking automatically. You can select default lists of age-appropriate websites or fine tune with your own whitelist.

Time Limits & Device Health: : Yes. Parents can put time limits on individual apps and on the device as a whole.

Parental Monitoring: Limited. You can review a report of sites visited and blocked as well as the time on the device, but you can only view these on the device itself, not on a parent’s phone.

You can also use Bark on CLEARPhone. CLEARPhone does filter and has screen time controls, but it’s still nice to monitor those texts and picture messages and Bark can help you do that.

Prevent Picture Texting: Limited Contacts. The phone only allows communication with whitelisted contacts, which are organized into groups and only available at limited times.

App Limitations: Parental Approval, Curated App Store. Pinwheel comes with a library of apps curated by therapists and psychologists including mainstream useful apps like music players and FitBit. Parents can say yes or no to each app. There is no app store, no social media, and no internet browser.

Time Limits & Device Health: Yes. Pinwheel is designed to promote healthy device use with the help of licensed therapists. The phone has custom modes throughout the day designed to match your child’s schedule and help them to focus on what’s important.

Which is the 'smartest' choice for your teen?

No matter what you decide, make sure to talk to your child about the risks of a smartphone.

NOTE: This article contains affiliate links. If you make a purchase using our link, you also support our mission at Protect Young Minds. Thank you! 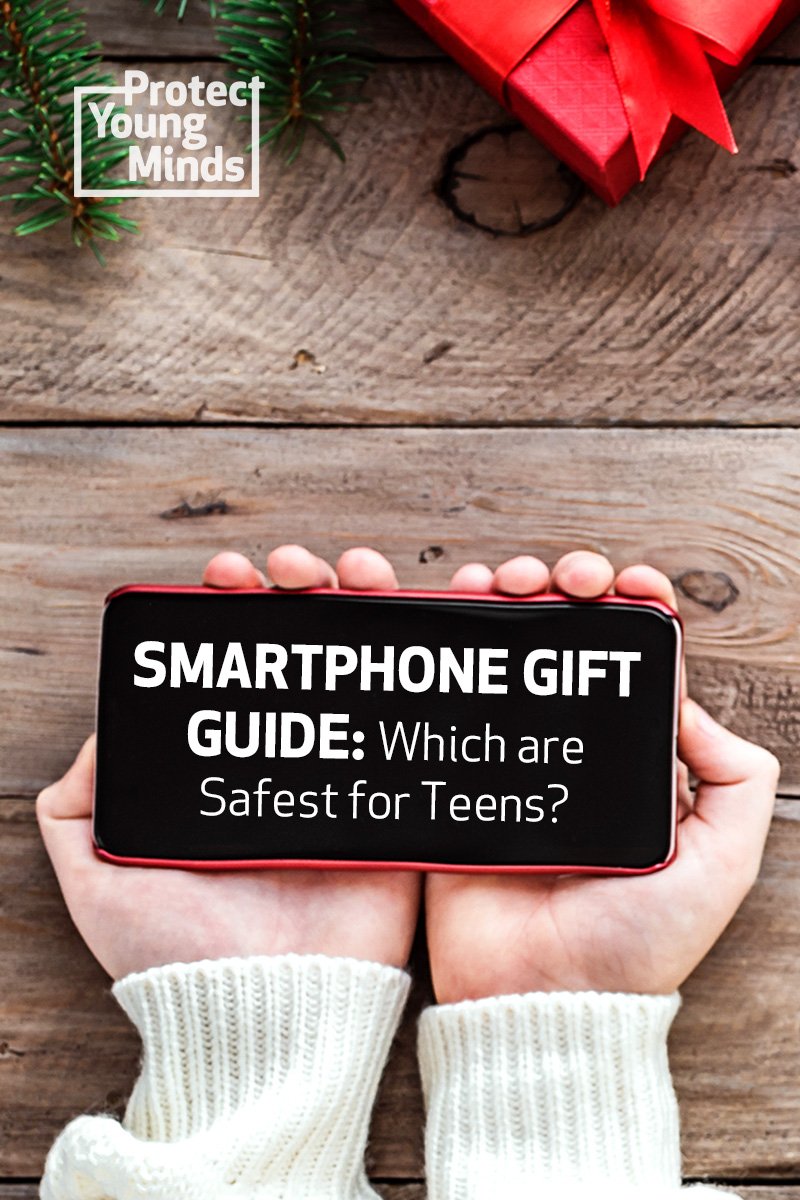