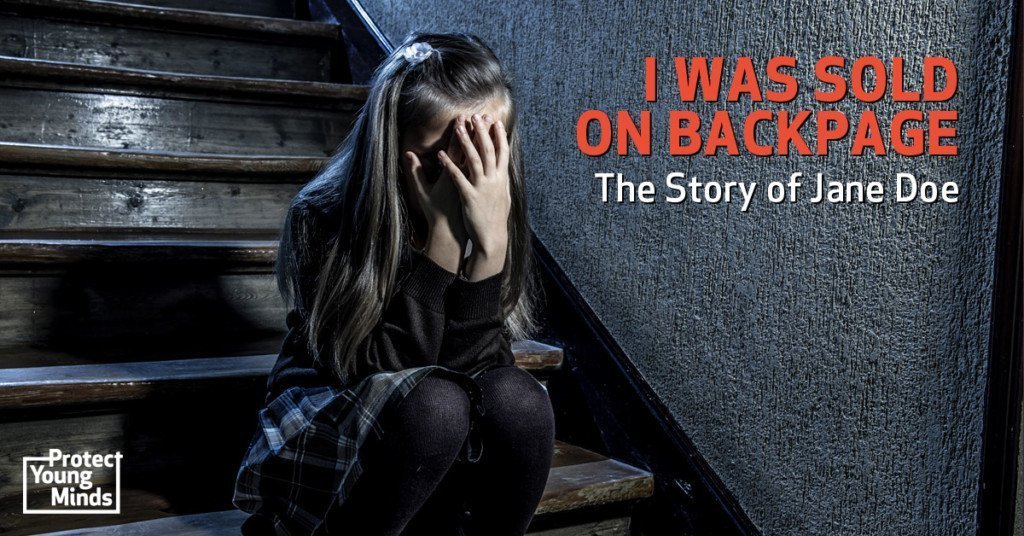 I Was Sold on Backpage.com: The Story of Jane Doe

No one knows the real number of children prostituted every year in the United States. Estimates are between 100,000 to 300,000. These are children bought and sold for sex in our own backyard. And, until last week, Backpage.com, an online classified ad platform, was the primary channel used to complete these transactions of modern-day slavery.

Today we’re celebrating because Backpage has been shut down in a collaborative effort between the FBI and other government agencies! However, to give this victory meaning we need to understand how child sex trafficking impacts all of us. Geoff Rogers at the U.S. Institute of Human Trafficking says, “As a movement we have to create more outrage. It's not enough to say, ‘that's not my child.’ What’s happening is flat out wrong!”

As a society, we have to decide if we’re going to allow websites to sell children for sex as easily as ordering a pizza.

Angela’s story: “This can happen to anyone.”

Last week, Kristen Jenson and I attended a global summit. There, we had the humbling opportunity to hear multiple survivors detail the horrific abuse they suffered while held captive in the sex industry. We heard Angela, mother of Jane Doe #3, recount the day her 15-year-old daughter was abducted and sold on backpage.com.

“I had never heard of Backpage until I started looking for my daughter. What I need you to know is that our experience could happen to anyone.

We are what you would call a normal suburban family. My husband and I have been married for 30 years. I’m the kind of mom who is completely involved in her kids’ lives —the mom that goes to all the soccer games and on all the school field trips. The only thing I did was to let my daughter go the mall to meet a friend.

When my daughter didn’t return home at the prearranged time, I started to send text messages. I knew something wasn't right. It was not in my daughter’s nature to ever be late. After many unanswered phone calls and texts, I finally got a message from her that read, ‘I’m OK, I’m with a friend.’  But when I called all her friends no one knew where she was.

I’m also the kind of protective mom that sets up all sorts of security measures and tracking on my kids’ phones. I could see my daughter was getting calls and texts. When I punched in the last number on Caller ID a man picked up the line. Very nervously he explained that he had never met my daughter. He was even in a different state. But he told me her information was online and where to find it. Immediately I looked it up. There on Backpage.com were pictures of my daughter next to her phone number. It said she was 21. I called the police and FBI instantly.

Though I didn’t know it, while I was carrying on a frantic search for my daughter, she was returned home to her room. We found out later that within minutes of her ad going up on Backpage, dozens of men were responding to purchase her —like you’d buy a car or anything. She had been raped multiple times before she came home that night. And the only reason she was brought back was because I had been actively looking for her and could track her phone.

What I want people to know is that this can happen to anyone. You don’t have to be a runaway or on drugs. My daughter simply went to the mall. There, another young woman who had been sent in to recruit victims, befriended her and lured her away.

SESTA-FOSTA and the seizure of Backpage

In early 2017, Jane Doe #3 and four other victims of child sex trafficking sued Backpage for their collusion in the child sex crimes perpetrated against them. “The Senate report found that Backpage.com manually and automatically removed words that indicated the person being advertised was a child, such as ‘little girl’ and ‘amber alert.’ Backpage would then post the sanitized ad.”

The Jane Doe’s lost. The First Circuit U.S. Court of Appeals found that section 230 of The Communications Decency Act (CDA) shielded Backpage from liability for the content of their ads.

Thanks to SESTA-FOSTA (see definitions below) an amendment to section 230 of the CDA has been made. As of April 6, 2018, Backpage and other ad sites can be held accountable for the content posted on their sites. Seven top officials of the site have been arrested on a 93-count indictment that includes charges of child sex trafficking!

Strangely, not everyone is celebrating the seizure of Backpage as a victory. Sex trafficking is a complex social issue. And we’ve seen some pushback on our Facebook page:

“Pretending the site is selling children is absurd and if it was actually the case then the site would make a wonderful tool for catching those people. The reality is stopping this site does not in any way stop sex traffickers it only stops escorts from being able to screen clients and work in safer conditions.”

Unfortunately many accept this type of comment as truth so it’s important to address concerns you may hear about SESTA-FOSTA. We want to give you the tools to speak up with confidence that the seizure of Backpage.com and its affiliates is a step in the right direction.

Were children really sold on Backpage?

YES. The National Center for Missing and Exploited Children explains that 73 percent of the child trafficking reports it receives from the public stem from the Backpage website.

NO. The FBI and other law enforcement agencies have multiple strategies for tracking criminals involved in sex crimes. The question we need to ask is should third party hosts (such as Backpage) be allowed to profit from the sexual exploitation of individuals while remaining immune to legal consequences? The answer is NO.

NO. In 2016, a 16-year-old Chicago girl was stabbed and beaten to death shortly after responding to an ad placed by her pimp on Backpage. A basic fact of the internet is that it has the ability to provide complete anonymity — anybody can pretend to be anyone. Some say that Backpage gives “sex workers” greater autonomy than those on the street.  Sadly, this is not the case. Most are controlled by third party individuals (pimps) and are often connected to larger sex ring operations.

Mary Mazzio, a former attorney, was following the lawsuit against Backpage. When she realized the courts could not protect victims under the current law she decided to capture the attention of the Senate by making the riveting documentary: I Am Jane Doe. It brought public awareness to the atrocities enabled by Backpage and was extremely instrumental in changing the law. We’ve included the trailer to I Am Jane Doe below.

WARNING: The following video contains examples of sexually explicit ads (no full nudity) posted on Backpage.com at 0:20 to 0:29.

FOSTA: The Allow States and Victims to Fight Online Sex Trafficking Act. This is the U.S. House version of the SESTA Bill.

FOSTA-SESTA: A joint Bill between the United States Senate and House. The National Center on Sexual Exploitation (NCOSE) explains:

“Prior to FOSTA-SESTA, websites were shielded from criminal liability even if they knowingly engaged in criminal conduct. This impunity from the law resulted in mass sexploitation. In Seattle alone, law enforcement officials have identified more than 130 websites where people—many of whom are sexually trafficked women and children—are bought and sold for sex.”

Abuse is abuse no matter where it occurs. Pornography, prostitution and sex trafficking are all connected and are rife with child sexaul exploitation. Sometimes we feel helpless to deal with such large social issues. But there is always something you can do! Here are two important resources:

Here at Protect Young Minds, we are ecstatic about the passing of SESTA-FOSTA and the shut down of Backpage.com! We are grateful to all who worked so hard to make this a reality, especially our friends at the National Center on Sexual Exploitation. Please consider donating to their amazing organization! 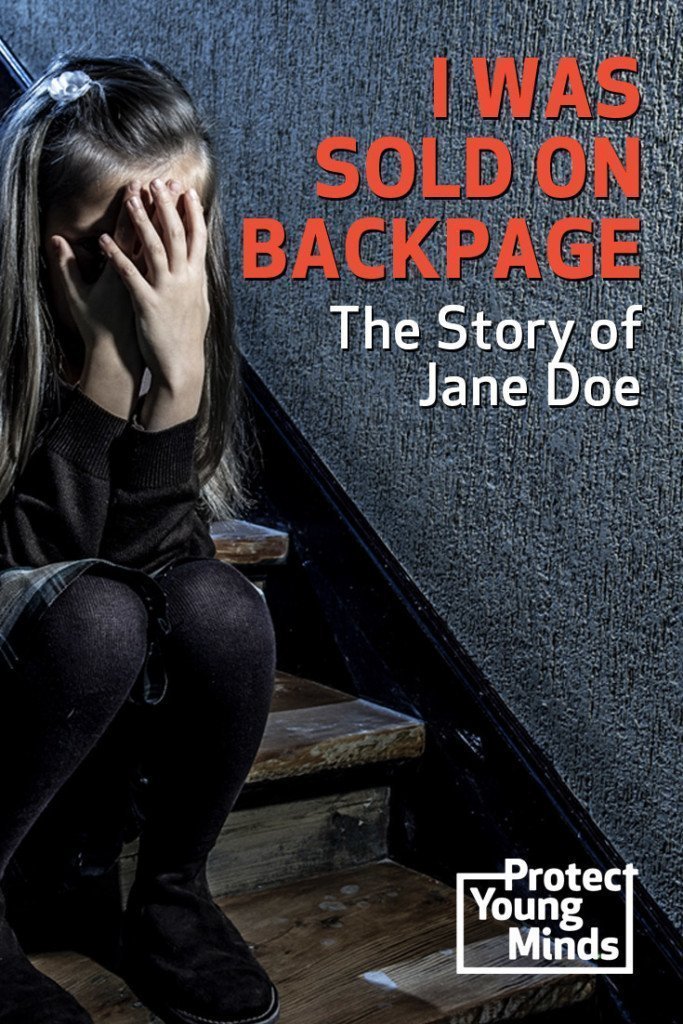