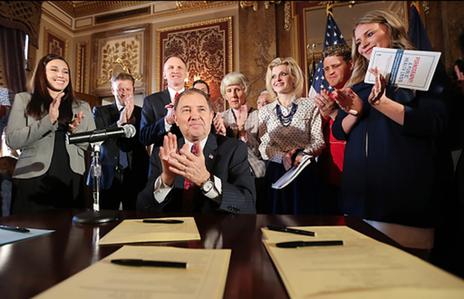 It's official! The governor of Utah signed a resolution this week declaring pornography a "public health hazard." And according to an email from Patrick Trueman, president of the National Center on Sexual Exploitation, more states are following. Why? To protect children!

Want to learn more about the resolution that is causing a such a huge media explosion?

This groundbreaking document was drafted by the National Center on Sexual Exploitation (NCOSE). It's only one page, but it includes six pages of scientific studies that show the hazards of pornography.

[This bill is] a watershed moment in protecting dignity and a turning of the tide against pornography.

"Pornography with its raw, debasing, violent and hate-filled scenes are the sex education for our children," she said.

Many are comparing the movement to acknowledge the harms of pornography to the history of the tobacco industry. In the 1950's smoking was common and promoted by doctors and Hollywood icons alike, but by the 1960's it was clear that smoking increased a person's risk for cancer. Decades later, the harms of second hand smoke became a matter of scientific record and restaurants, airplanes and other public areas banned smoking. That's what we need to happen with the distribution of pornography.

Do you still have questions about the resolution? Clay Olsen, founder of Fight the New Drug, shared the following on social media:

Many have asked me... "What does this resolution mean?" "Will this resolution infringe on first amendment rights?" "What good will it do?"... Let's quickly answer those questions:
1. What does this resolution mean? It's simply a declaration from the Utah State Legislature stating that pornography is indeed a public health crisis. That's it. Nothing more.
2. Will this resolution infringe on first amendment rights? Absolutely not. If it did I wouldn't have supported it. This is a resolution, not a law or bill.
3. What good will it do? Having the state of Utah sign this resolution is a big deal. It not only helps validate the efforts of Fight the New Drug, Utah Coalition Against Pornography, National Center on Sexual Exploitation, Culture Reframed, and so many others but it also establishes a foundation to bring this subject out of the shadows and allow us to discuss it within the framework of a public health concern rather than focusing on morality. Not only that, but it also paves the way for other states to follow suit (which is happening)!

Join the National Center on Sexual Exploitation in opposing pornography and its harms by heading over to their #EndExploitation Action Center. Here you will find fast and easy ways to make your voice is heard. As we work together, we can end this public health crisis. We can make the world a safer place for the rising generation!