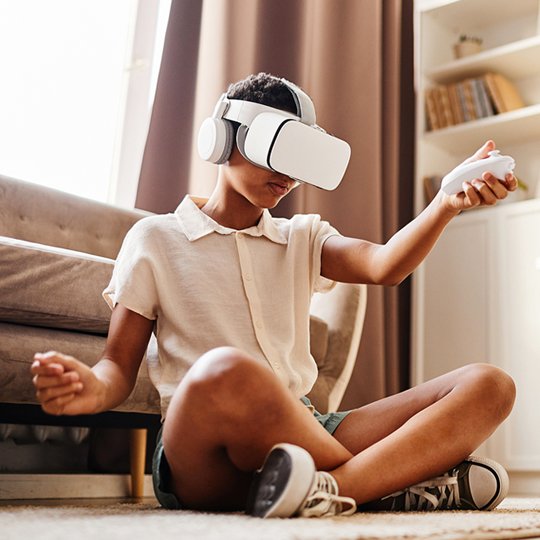 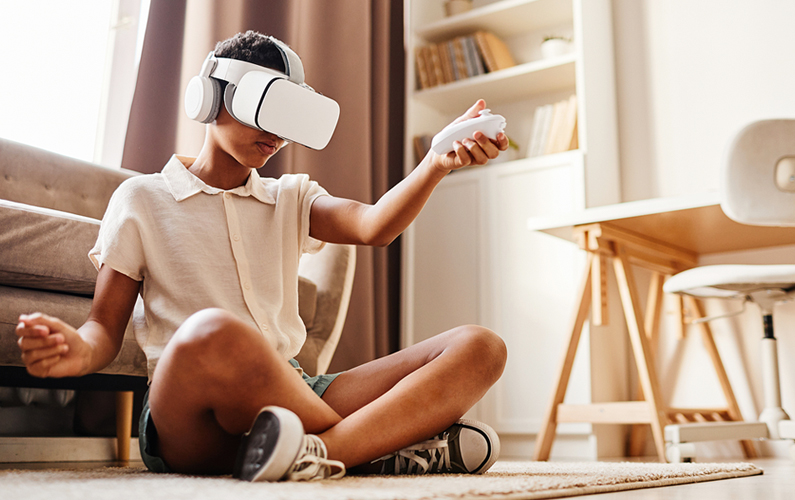 What is the Metaverse and Are Kids Safe There? Our Top 3 Concerns

You may have heard that Facebook changed its name to Meta to reflect the company’s new focus on building the “metaverse.” Almost 80% of VR headset sales last year were of Meta’s Oculus brand and thousands of people are now interacting virtually on their Horizon Worlds platform. But what exactly is the metaverse? And is it safe for kids to participate in this new virtual reality?

What is the metaverse?

But generally, the metaverse is a future combination of several technologies that make the internet more immersive. These technologies include augmented reality (think Pokemon Go or Google glasses), live video chats (like Zoom or Facetime), a digital economy (those virtual items and coins your kids are always wanting in Minecraft or other apps), and virtual reality (like the Oculus Rift, which is now owned by Facebook/Meta).

It's this last item, virtual reality, that most people are talking about right now when they talk about the metaverse.

Is the Metaverse safe for kids?

First of all, in order to join Horizon Worlds, you need a Facebook account. And to have a Facebook account, you need to be at least 13. We’ve said over and over: you don’t want your kid’s online experience to begin with lying about their age. This sets a bad precedent for ignoring the rules set up for their safety online.

But early reports suggest that many parents are ignoring this requirement and letting young kids explore Horizon Worlds. Many adult users say the virtual spaces are often unusable because of loud kids running amok, introducing themselves to strangers, and sharing personal information.

When your child is old enough to use virtual reality safely and responsibly, there are three areas of concern to consider before getting involved in the metaverse:

Will VR ruin my child’s vision?

Some parents worry that playing with VR could cause problems with their children’s eyes. Could VR cause near-sightedness because the screen is so close to their eyes?

The good news is that because VR is simulating seeing things far away, it’s actually healthier for kids’ eyes than other screens. While using VR, kids focus more like they would if they were outside than how they do when reading a book or using a tablet.

However, spending a long time focusing on any screen can cause dry eye and eye strain, so one eye doctor recommends limiting play to 20 minutes at a time.

Another vision concern with VR is the pupillary distance (PD). This is the distance between the centers of your pupils (you may have had to enter this number if you’ve ever ordered glasses online). A child’s eyes aren't as far apart as an adult’s. If the VR headset can’t adjust to a smaller size, the picture may look blurry and cause headaches and dizziness. Most headsets on the market cannot adjust close enough for a child, which is why most are labeled as not for use by kids under 13.

Because VR simulations have become so immersive, they can actually be scarier to children than similar content in movies or video games. Instead of watching a character fight that monster on a screen, it appears to be chasing you in real space.

This also means that any exposure to sexual content is going to be more intense than seeing it in a movie or video game.

When selecting VR games for young teens, consider toning down what you would normally consider acceptable amounts of violence and intense images to account for the immersiveness of the experience.

Bark has a good guide for choosing age-appropriate VR games. There are also great educational VR experiences out there that can be positive ways to fulfill your kids’ interest in VR while staying out of gaming spaces.

The main goal of Meta (and other companies) is to use virtual reality to create spaces like Horizon Worlds where people can meet online in ways that are more similar to in-person interaction. Of course, anything that involves talking to strangers online includes the risk of sexual predators and sexual assault.‍

Reports are coming in of people being virtually groped by strangers in Horizon Worlds. Other experts warn that child predators are often the first to arrive in unregulated online spaces to take advantage of the time before the need for safeguards becomes clear.

Though Meta is finally starting work on adding parental controls to its VR headset, currently Horizon Worlds doesn’t have the parental controls or safety options that we take for granted on other child-friendly games. You can’t turn off chat and you can’t play offline because the whole point is to interact online. It’s best to think of spaces like Horizon Worlds not as games, but as chat rooms and restrict your kids as you would from those spaces.

Like many live interactions online, there is often no record afterwards of what happened to your child. The Oculus headset does temporarily record user interactions, but these will be quickly recorded over unless a player makes a report. Often, there’s nothing that can be done to prevent it from happening again with a different user.

For this reason, we would advise that most parents keep their kids off Horizon Worlds until Meta provides better parental controls and safety features. The same applies to other VR games where you interact with strangers.

If you do choose to let older teens participate in the metaverse of Horizon Worlds, it’s important to discuss the safety features that are available.

One critical feature is the new “Personal Boundary” setting, which allows players to create a four-foot bubble around themselves. By default, the personal boundary is turned on for non-friends only, but you can turn it on for all users or turn it off by going to the Settings menu under “Safety.”

Unfortunately, there’s no parental control to prevent your child from changing this setting, so be sure to discuss with your child that the purpose of this feature is to prevent unwanted interactions.

Entering the safe zone and reporting/blocking other users

Meta claims it will not tolerate hate speech or sexual harassment on Horizon Worlds, but it is proving difficult to enforce these rules. A BuzzFeed investigation revealed that Meta is relying “mainly on user blocks, mutes, and reports to notify it of Community Standards violations in VR” and that moderators are often inconsistent when applying Meta’s standards.

Still, if you let your child play, you’ll want to make sure they know how to report unsafe or unwanted behavior. To do this, your child needs to take these steps:

If you’re concerned about privacy, it’s important to know that reporting will send the last few minutes of your child’s gameplay to be reviewed by a moderator.

The Metaverse: A new frontier

Remember that the metaverse is mostly a concept that doesn’t exist in the real world yet. We don’t know exactly how it will eventually look. And right now, there’s little research on the effects of virtual reality on society in general and kids in particular.

To learn more about Meta's vision for the Metaverse, concerns for children, and how you can speak up visit the National Center on Sexual Exploitation's Meta page. 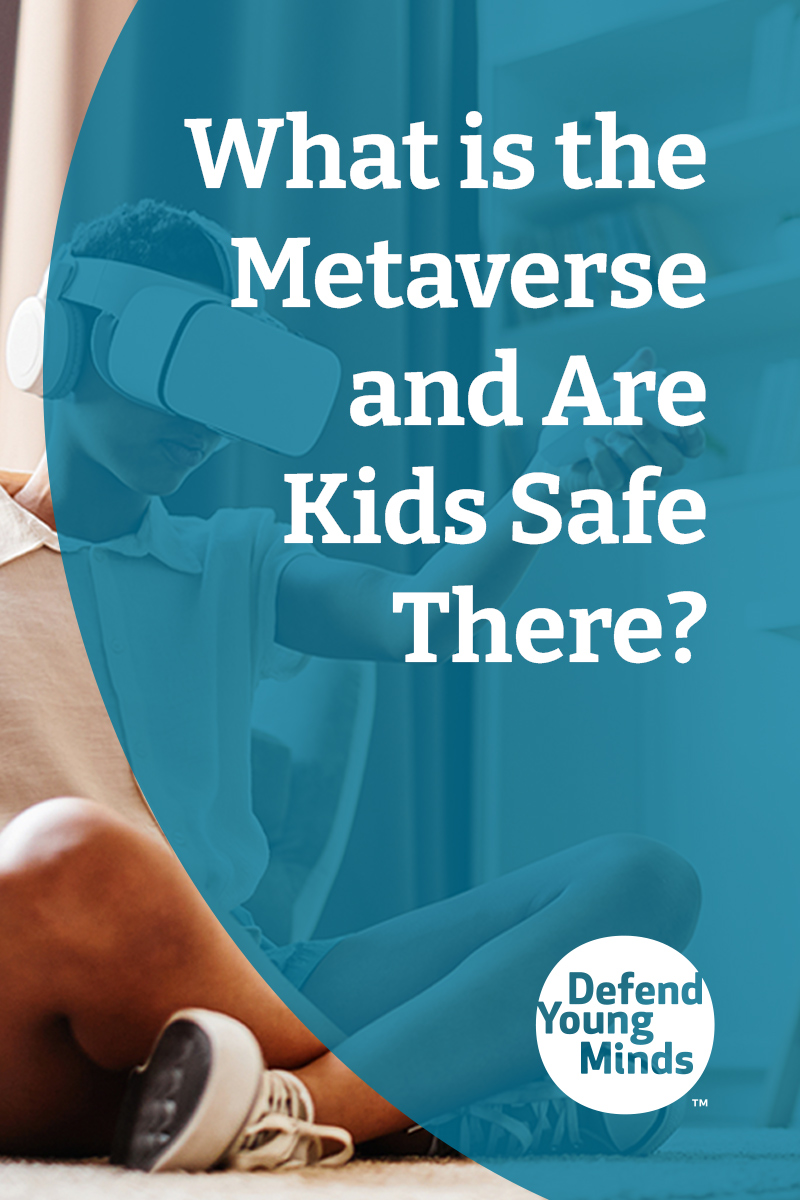