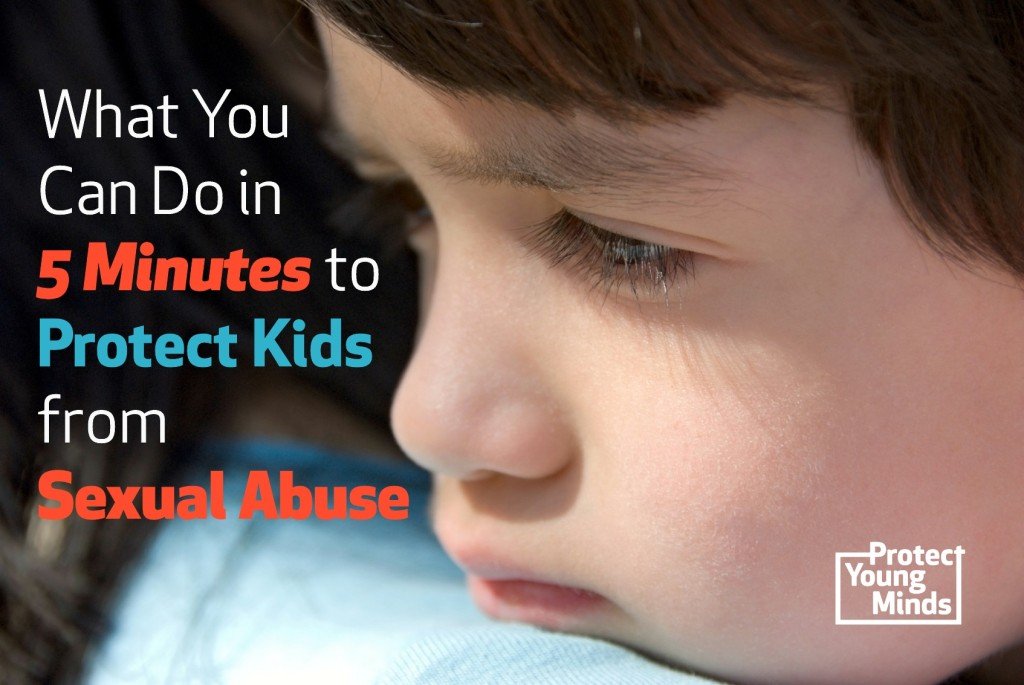 Parents can do a lot in just 5 minutes to protect their kids from sexual abuse and pornography. And that’s a good thing, because it takes less than 5 minutes for a perpetrator to begin grooming a child for sexual abuse. Sadly, this week I received a message from a mom telling me how this happened to her 6 year old son in less than 5 minutes!

Lisa (not her real name) gave me permission to share her (paraphrased) story :

Last week I discovered my 6 year old son lying on his bed and touching his penis. After we talked about what he was doing, my son told me that a man showed him a video of a man touching his penis, and the man who showed him the video said, ‘It feels good when you touch it.’

“I asked my son when this happened and discovered the event took place last week when we were at our friend’s house for dinner. This friend rents out her basement to a single adult man. My friend had put the kids’ toys down in the basement so she could better clean her upstairs; she was preparing to open up a daycare business on her main floor.

“While we were there for dinner, the kids wanted to play so our friend told them to go downstairs and pick out some toys to bring back up. They were down there for literally 5 minutes! The man saw the boys and called my son over to him by saying,’I want to show you something, come here!’

“I’ve talked to this man several times in the past. I’ve even felt comfortable sharing my religious beliefs with him. At the time we were there for dinner, I didn’t even know he was down there as he has his own entrance. And the kids only ran down there to grab some toys!

“We went to the police that night and two officers interviewed my son, but my son was so tired and didn’t tell them very much. My main concern right now is how to help my son get that video out of his mind! I am a protective mom and now I am so mad at myself for letting this happen!”

I wish I could say that I rarely hear sad stories like this, but they are becoming more and more common. And grooming a child with pornography has been going on for decades. But no parent expects that it can happen this quickly in what they thought was a safe place.

I sought out advice from expert Ginger Kadlec, founder of Be a Kid’s Hero, and trained in child abuse forensics. I asked her if showing pornography to a child was considered child sexual abuse. Ginger helped me understand the difference between child sexual abuse and child sexual assault:

“Child sexual abuse and child sexual assault can be one in the same; however, they can also be vastly different. The term ‘assault’ refers to physically forcing or coercing someone to engage in a sexual act(s) against their will. There are situations where a child (or youth) may willingly engage in a sexual act, but can be underage and therefore not legally able to provide informed consent. Such examples can involve more than one youth engaging in sexual acts together or even a ‘Romeo-Juliet’ scenario where an adult engages in romantic or sexual activity with a child.

“In the United States, there are federal statutes that are intended to protect youth from pornography and other potentially harmful material. From the U.S. Department of Justice:

‘The standard of what is harmful to minors may differ from the standard applied to adults. Harmful materials for minors include any communication consisting of nudity, sex or excretion that (i) appeals to the prurient interest of minors, (ii) is patently offensive to prevailing standards in the adult community with respect to what is suitable material for minors, (iii) and lacks serious literary, artistic, political, or scientific value for minors.’"

So, showing pornography to a child is child sexual abuse!

Preparing Kids: 3 Things They Must Know

It certainly was not Lisa’s fault that a perpetrator (who she didn't know was in the house) approached her son while he was getting a toy. No parent can foresee every possible scenario where a perpetrator might try to groom a child. However, real protection is not just preventing an occurrence of sexual abuse; it is also preparing the child to know how to deal with it if it happens.

In other words, if a child knows

that child has a much better chance of staying safe and recovering more quickly from the exposure.

Children need to know that abuse of any kind is NEVER their fault; however, they can participate in a plan to protect themselves by alerting a trusted adult if someone is touching them (or someone else - including on video) in private areas of the body.

Fortunately, Lisa was able to find out quickly what had happened to her son. She is generously allowing us to use her story so that other parents can realize how fast an event like this can happen. It’s important for parents to prepare their children to know what to do.